By French Wine and Vine Institute

Mechanical weeding in the row is not simply a question of replacing one technique by another. It is a question of knowing what equipment is available, planning a weed management strategy and reorganizing labour; it also requires more technical approach to adjust the equipment correctly, and a more agronomic approach to avoid undesirable impacts on production.

Total chemical weed control has long since ceased to be the rule in the majority of French vineyards (survey on cultural practices, Agreste, 2010). Mainly applied in-row, i.e. on 30% to 50% of the surface area of vineyard plots, this is now being called into question by the planned ban on glyphosate – the main component in chemical weed control strategies – in association with pre-emergence molecules. Mechanical weeding is one of the most credible alternatives because it is effective when properly done. This is the technique generally used in organic farming. For years, equipment manufacturers have been offering solutions suitable for almost all vineyards. It does, however, pose a number of challenges, both technical and economic, especially when it comes to in-row weed control, which is a sensitive area since we need to weed close to the vine trunk without damaging it. Winegrowers are thus faced with having to choose the right tool, develop a strategy that takes into account the displacement of soil, possible restoration of the vineyard to facilitate the passage of tools, the challenge of correctly setting the tool, which can prove complex, and the constant need to anticipate as much as possible in order not to be overwhelmed by weeds. Technical mastery of the operation is the key to mitigating the economic impact as yields can be affected by poor weed control or injury to the vine trunk. Mechanical weeding in the row is therefore not simply a question of replacing one technique by another. It is a question of knowing what equipment is available, planning a weed management strategy and reorganizing labour; it also requires more technical approach to adjust the equipment correctly, and a more agronomic approach to avoid undesirable impacts on production. The transition phase is the most delicate, because since the soil has not been tilled for a long time, a large part of the vine’s root system may be located at shallow depths reached by the tools. It is also the period during which the flora to be managed will develop simultaneously with the state of the soil surface, changing the winegrowers’ work habits.

A range of complementary tools
The main categories of in-row cultivator are: mouldboard ploughs, rotary hoes, weeder blades and brushes. There is also a range of simplified, passive tools, aimed at increasing the work flow and combining it with other operations in the vineyard.
Mouldboard ploughs work by cutting a strip of earth and turning it over, using a more or less pronounced mouldboard share. These tools are very effective but require a berm, a mound above the inter-row level, to avoid digging into the soil and touching the shallow roots of the vines. Managing the displaced earth is part of the strategy that needs to be developed. The working speed is limited with this type of tool.
Rotary hoes are useful in loose, cool soil for their effective impact on weeds. They only permit low travel speeds to allow time to work on both sides of the vine. They weed by cutting, pulling and dispersing. In fact, these tools displace the earth in a rather diffuse way which needs be monitored, otherwise the vine roots will gradually be exposed. There exist specially designed rotary hoes that do not move too much earth. A hydraulic power pack is generally recommended to prevent overheating of the tractor’s hydraulic system.
Weeder blades perform shallow maintenance work. They raise a strip of earth and only destroy weeds if the earth is broken up, separating the clods from the weed roots. The ideal working speed with these tools is therefore rather high, around 4 – 5 km/h, to ensure the clods are broken. The result can be accentuated with various clod-breaking devices simply fixed to the blades.
Horizontal axis brushes perform work halfway between mechanical weeding and mowing. They are a useful means of controlling weeds, scouring the soil and offering the added advantage of brushing and therefore desuckering the vine trunk when necessary, while leaving the surface of the soil flat.

Various retraction systems.
The different categories of tools are fixed to the cultivator frame. It is this base which holds the retraction device, which either pivots or takes the form of a deformable parallelogram. The difference is the movement of the tool in relation to the vine trunk, which is perpendicular to the direction of travel in the case of the deformable parallelogram. Retraction is either fully mechanical, which means pushing heavily against the trunk, or assisted, by means a hydraulic or pneumatic cylinder. Assisted solutions help raise response times in soils that are difficult to work, or when the volume of earth to be moved is large. Hydraulic release also makes it possible to retract a tool in front of a young replacement vine without leaning on it.

What are the main principles and strategy?
Mechanical weeding can have an impact on production (Gaviglio C., 2012) for different reasons. Tools can damage or cut the vine trunks if they are incorrectly adjusted, or will inevitably cut some shallow roots. Moreover, weed control may be incomplete both in terms of the surface covered and over time, as the tools do not having a lasting effect on growth. Consequently, there will still be some weeds competing for water and nitrogen. To limit this negative impact, we need to look at several avenues of optimisation: the intervention strategy for efficient weed control, and the choice and adjustment of tools to avoid damage.

You need to anticipate the growth of weeds because in-row cultivators are not designed to clear brush. The more developed the weeds, the more firmly their roots hold the strip of earth being worked, and the greater the risk of clogging (especially with rotary tools). This makes it more difficult to achieve the desired fragmentation of the soil for effective weed control, and tool adjustment more tedious. Strategically, anticipating means carrying out an initial intervention as early as mid-February, if the ground conditions allow, provided that the vine prunings are shredded or removed from the plot. The main objective of this first intervention is to create favourable conditions (soil already worked, little grass) for spring management, which is the most critical period. During the summer, maintenance can be faster if the spring has been well managed. Around harvesting time, intervention is possible to counter autumn growth or to reshape the berm. It is crucial to manage earth movement, whether using a strategy of hilling up/ploughing back or by some lighter tilling. A strip of loose earth which is easy to work must be maintained. Alternating tools allows earth movement to be managed and prevents the occurrence of compacted areas of soil owing to repeated passes. It is important to take into account the remaining vineyard management techniques, especially desuckering: depending on the evenness of the soil, the shoots are more or less accessible to mechanical means of removal. The question of raising the wires in VSP trellis systems also has to be borne in mind, so that they are not on the ground when mechanical weeding is carried out. 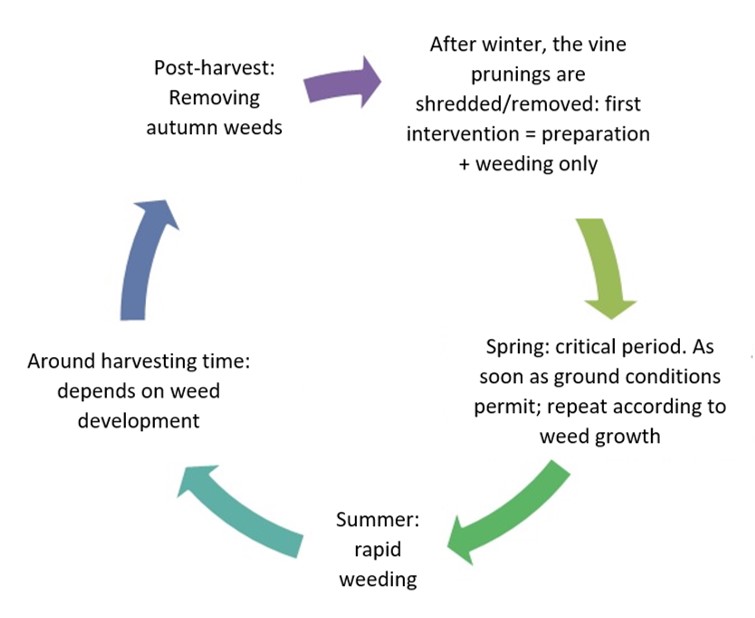 Adjusting tools to optimize the work.

Three adjustments are essential to work with precision and safety around the vine trunk: working depth, tool centring, and the safety margin set for the retraction system.
Many other settings are also available on the different tools for adjusting sensitivity, hydraulic return hardness, etc., but these are specific and not generic.
The working depth determines the resistance encountered by the tool in the soil, the volume of earth moved and thus the force required for retraction. As weeding is shallow, there is no point in digging deep. It only serves to complicate adjustment, as it makes it more difficult to find the right balance between speed and the reactivity of the tools to avoid the vine trunks.
Centring the tools is crucial for correct positioning in relation to the row of vines: if you aim to have the tools cross this row too far, the lateral movement of the retraction system will also be excessive and require more time than a minimal crossing, while also reducing working speed and increasing the risk of damage to the trunk. Adjustment of the retraction system will depend on the characteristics of the vine trunks: if they are very straight and well-aligned, it can be adjusted to approach the trunks as closely as possible to limit the unweeded area. In less ideal plots, however, it may be necessary to set a safety margin: you should seek to trigger retraction a few centimetres before the trunk. To limit the proliferation of weeds in this area, the tools can be equipped with extra cleaner blades, moving parts hinged at the end of the blade or behind the tool frame, the purpose of which is to come into contact with and break up the strip of earth left for safety. Ideally, the feeler bar follows the ground to avoid detecting the trunk of a leaning vine too early, or more seriously, too late.
Depending on the soil surface, the presence of large clods, stones or well-developed weeds, the feeler bar may need to be raised. The basic, centring and safety margin settings are all the more important when transitioning from chemical to mechanical weed control, because during this period there is a greater risk of encountering large, shallow roots in the work area before the root system has the time to redistribute itself.

Conclusion
Mechanical weeding of the vines is likely to increase significantly given the context in relation to the use of herbicides. While this technique is effective when properly mastered, deployment on a large scale by winegrowers unfamiliar with tillage will require a major training and information effort. The issue is one of technical mastery, to mitigate or avoid the agronomic pitfalls associated with the change in practice. This transition will also require financial support, because the additional direct cost of replacing herbicides by mechanical weeding is around 200 to 300 euros per hectare in large vineyards, not counting the reorganization of labour that it entails for the vineyard businesses.

On the same subject